Structural Inspection Path Planning considers the problem of finding a feasible - possibly optimal or close-to-optimal - path for an aerial robot such that its onboard perception system (e.g. camera, LiDAR) "covers" the whole surface of a desired structure. Essentially, it is a problem of complete coverage. As it corresponds to an active research topic, a variety of methods have been proposed and the scientific community is still investigating path planning strategies that are able to provide good inspection solutions in close-to-real-time computation effort. Within the framework of this document, we will overview the approach proposed in the following two contributions:
​The goal of a Structural Inspection Path Planning design is to be able to provide full coverage solutions that are of low cost (in terms of overall path distance or time-of-travel), are computed in short time and with low computational load, while accounting for motion constraints of the vehicle and sensor limitations (e.g. Field of View).

Among the most well-established approaches in the field, those that separate the overall problem into that of finding a minimal set of full-coverage viewpoints (Art Gallery Problem - AGP) and subsequently compute the optimal route among them (Traveling Salesman Problem - TSP) have been particularly successful. These methods often manage to produce good solutions in short time. However, they have two main limitations and problems, namely:
As a response to the abovementioned limitations, the problem Structural Inspection Planner (SIP), revisits the concept of 2-step optimization based inspection path planning. Essentially, SIP is driven by the idea that with a continuously (or very fast) sampling sensor, the number of viewpoints is not necessarily important but mostly their configuration in space. SIP does not search for a minimal set of viewpoints but rather for a set of full coverage viewpoints positioned such that the overall path gets minimized. SIP employs an iterative, viewpoint alternation and route re-computation 2-step optimization paradigm. Therefore, it guarantees to find feasible path solutions for both holonomic and nonholonomic vehicles and typically arrives at full-coverage solutions that are of low-cost.
SIP Algorithm Pseudo-code
Finally, the optimization problem to be solved at every SIP iteration takes the form:
Minimize the sum of squared distances to the preceding viewpoint gp^{k-1}, the subsequent viewpoint gs^{k-1} and the current viewpoint in the old tour g^{k-1}. More formally: 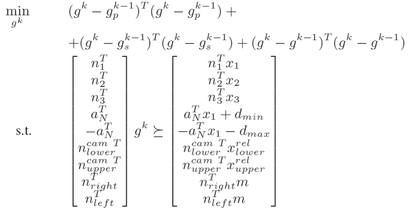 Which essentially consists of a Quadratic Program with Linear Constraints. The heading is determined according to:

SIP Point-to-Point Paths
In its current implementation, SIP relies on State-space sampling methods, while an extension to control-space sampling methods is possible. To find path solutions from one viewpoint to the other, it employs a Boundary Value Solver (BVS) for holonomic or nonholonomic vehicle configurations and relies on the optimal Rapidly-exploring Random Tree (RRT*) algorithm to derive collision-free paths.
It is highlighted again, that the aforementioned two steps (viewpoint optimization and tour computation) are executed in an iterative fashion such that the algorithm derives solutions of improved cost.
Simulation Studies
The following video presents an execution of the SIP algorithm and enables intuitive understanding of its operation. The first part of the video simply presents the mesh visualization process.
Using Rotorcraft UAV:
The two videos below present indicative subsets of the experimental datasets:
Learn more:
To learn more about the SIP algorithm essentials, you may go through the papers and study the code at our open-source repository: https://github.com/ethz-asl/StructuralInspectionPlanner/

As this corresponds to an open research topic, interested students may contact Dr. Kostas Alexis to discuss potential projects.

As mentioned, the presented Structural Inspection Planner is released as an opens-source ROS package. Follow the instructions below to get it running on your ROS-enabled machine.

The structural inspection path planning algorithm presented in our paper contribution [1] is released as an open-source toolbox. The algorithm assumes a triangular mesh representation of the structure and employs an alternating two-step optimization paradigm to find good viewpoints that together provide full coverage and a connecting path that has low cost. In every iteration, the viewpoints are chosen such that the connection cost is reduced and, subsequently, the tour is optimized. Vehicle and sensor limitations are respected within both steps. Sample implementations are provided for rotorcraft and fixed-wing unmanned aerial robots.

Additional functionality allows exportation of the computed paths to drone mission files. Supported systems are PX4/Pixhawk and DJI drones, as well as the RotorS simulator and will be extended in the future. (Refer to the utils section)

To use the toolbox a ROS indigo installation with catkin set-up and the following extra packages are required:

Once these are there, a baseline example on how to get and install the tool is the following:

The build process should then be executed and successfully complete. Subsequently open two separate shells and run the following two commands to execute the baseline demo of the algorithm:

For visualization puprposes, a 3rd terminal has to be launched:

To display the progress, chose ‘/kopt_frame’ as fixed frame or publish a suitable transform.

Detailed documentation may be found at the Wiki!

If you use this software in a scientific publication, please cite the following paper:

This algorithm was developed by Andreas Bircher with the help and support of the members of the Autonomous Systems Lab. The work was supported by the European Commission-funded projects AEROWORKS and ICARUS.

You can contact us for any question or remark:
* Andreas Bircher
* Kostas Alexis